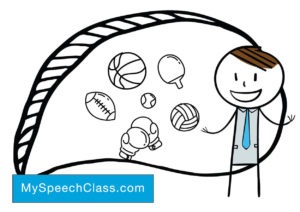 Sports motivation ideas on animal training packs, indoor court and football games and multi-discipline activities, and speech topics for speakers who want to compete with a great psychic energetic oral as self-esteem test – a lot of them like to that believe it or not.

See our sports speech topics on popular themes such as badminton, Paris marathon, baseball bat tricks, and English speaking notes for anyone who is looking for athletes issues to instruct or share knowledge. Most of the material below could be seen as hints for your sub or main points in a demonstration outline!

All these speech topics can be altered and transformed in your own way!

Test it yourself now: