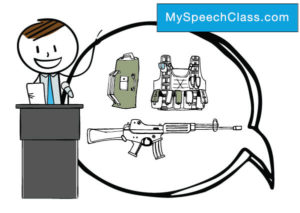 Military speech topics and ideas for writing a speech on military and the army stuff like air missile defense strategies or ways to salute in different countries. This page is broader than only on the US army, air forc, and navy issues.

I try to cover for you as much persuasive and informative themes as possible related to defense and armed forces, militias, the marine corps and coast guard. This is one of my special speech topic idea pages.

Look on the left for other general and focused examples for an educational spoken essay presentation at school. Twenty interesting and current military speech topics for a good informative on objects, subjects, events, structures and entities can be about:

Here are easy to research ideas for writing a speech on women in the military speech topics:

These are examples of military speech topics based on interesting persuasive government policy writing topics. Describe pros/cons or take a side in the public debate about these speech ideas on controversial: