It’s no accident that most good Hollywood movie scripts follow this pattern: exciting opening (think Saving Private Ryan), an interesting and easy to follow storyline, and a memorable finish (think Shawshank Redemption). Screen writers realize that their audiences put a lot of stock into first and last impressions. Guess what? Your audience does, too. Because of this is, your introductions and conclusions always need to be exceptional.

An exceptional introduction will do all of the following: 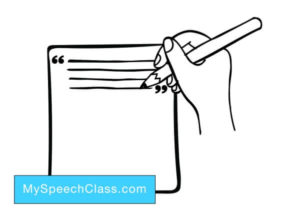 Gaining the audience’s attention is always the first thing to do in your speech. People generally don’t tune into speeches beginning in the middle, so you’ve got to capture their attention right from the start.

There are a number of different devices that work well for gaining the audience’s attention:

Establishing credibility and rapport begins with your attention-getter and continues throughout the rest of your introduction. The basic formula for credibility is this: COMPETENCE + CHARACTER = CREDIBILITY.

“Character” basically refers to the audience’s perception of your goodwill and trustworthiness. Some ways to enhance your perceived character in the introduction include:

Perhaps the audience will know of your credentials before you begin speaking, whether through a separate introduction of you as a speaker or through your reputation on your topic. If they don’t, you can mention your competence by simply stating your experience and expertise relative to the topic. Of course, you don’t want to damage your perceived character by bragging, but if you just state the facts it shouldn’t be a problem.

The average audience member asks themselves this at the beginning of every speech: “Why should I care?” It’s up to you as the speaker to show the audience how the speech you are about to give is relevant to their lives. Think in terms of the audience’s needs and let them know how your speech will help them fulfill those needs.

Typically, the preview of the speech will come near the end of the introduction. All that is required is just a few lines dedicated to outlining the main points that will be discussed in your speech.

Finally, the last goal of the introduction is to let the audience know that the body of the speech has begun. This can be accomplished with a signpost, a blatantly obvious transitional statement. Examples of signposts that can be used at the end of the introduction include: “my first point today”, “to begin with today”, etc.

Overall, your introduction should be about 10-15% of the total speech length. Any shorter, and you probably haven’t accomplished everything that you should. Any longer, and you are taking valuable time away from the body of the speech.

Cite this article as: Jim Peterson, "Speech Introductions," in My Speech Class, May 11, 2009, https://www.myspeechclass.com/intros.html.