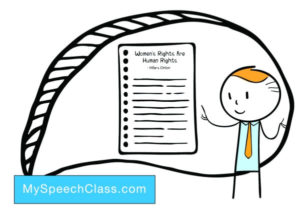 For many people, delivering a speech in front of a crowd of people is about on par with getting a root canal done. However, when it comes to enacting change or standing up for your beliefs, being well versed in the art of persuasion is crucial.

We often forget the impact that well articulated, spoken word can have on an audience; some of the most famous persuasive speeches that were ever given continue to impact and shape our society today.

Martin Luther King Jr. – “I Have a Dream”

A speech about ending racism and segregation, and coming together as one society, in 1963, Martin Luther King Jr. addressed over 250,000 people in front of the Lincoln Memorial. King’s speech would later become one of the most famous persuasive orations ever given. Known for his charismatic and passionate style of communication, King’s “I Have a Dream” speech is frequently epitomized as the ideal example of expressing one’s values and convictions. King’s use of vivid language and imagery immediately captured the audience’s attention making this historical speech a memorable one.

Barack Obama – “Against Going To War With Iraq”

Throughout history, war has been a common topic of persuasive speeches. Likewise, today in an age where wars and conflict continue to be rampant, war is the perennial topic for public addresses. One of the most famous present day declamations is president Barack Obama’s speech, “Against Going to War With Iraq.” In this 2002 speech, Obama expresses his views on the war with Iraq using both logistical arguments and engaging rhetorical devices.

Winston Churchill – “We Shall Fight on the Beaches”

At a time when the world was entering into a crisis, Churchill speech was not only about persuading mankind to fight, but about instilling hope and strength. At a point when all seem bleak, Churchill delivered an impassioned speech to the people, offering them a much needed sense of guidance and confidence. Delivered in 1940, Churchill would subsequently give several other well known persuasive speeches during World War II including, “This Was Their Finest Hour.”

Although given in a somewhat unconventional style, Lincoln’s “Gettysburg Adress” is one of the most well known persuasive speeches in American history. Spoken rather hastily, totaling just under three minutes, Lincoln nevertheless convincingly imparted his love and dedication to the freedom and the American country.

Women’s rights issues have frequently been the focus of many rhetorical declarations. As women have fought to earn equality and matching human rights, persuasive speeches have played a vital role. Although the process has not been without setbacks, impassioned speeches such as Clinton’s “Women’s Rights Are Human Rights” help instill in society the need for change and social action.

Check the Price Hire a Speechwriter Get Help
Cite this article as: Jim Peterson, "Famous Persuasive Speeches," in My Speech Class, October 20, 2014, https://www.myspeechclass.com/famous-persuasive-speeches.html.