The goal of descriptive public speaking is to narrate about an object, event or phenomenon in a way the audience is able to visualize the image that is portrayed by the public speaker. 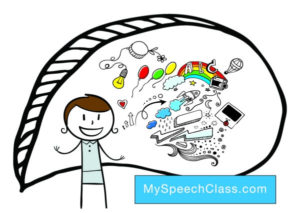 Your emotions and feelings are the core leading ladies when you prepare. First write down all thoughts, memories and rough ideas. All the things that pop and come up first when you think about a certain candidate speech idea. Let’s say you want to create a descriptive speech topic about a tall building you have visited, for example the Menara Kuala Lumpur Tower in Kuala Lumpur, Malaysia. The first things that pop up talking about that mega structure are:

Yes, you are right, I have been there. In other words, allow for a free play of facts, feelings and emotions, that is the essence of speech writing on a descriptive speech topic. After the inventory do outline the facts in a text to speech and a few slides.

Use imagery and figurative figures of speech; words and terms that denote all impressions and represent the object or process being described are important.

This descriptive speech topic list is just to accelerate and stimulate your start up. Pick some ideas and write down suggestions and things that may strike you. Give yourself a boost!

May people use PowerPoint slides to enhance understanding on their descriptive speech topic. My ten easy PowerPoint speech help tips:

Print this handy top 10 public speaking PowerPoint speech advices, use it as a little secret table topics help paper when you are preparing and delivering in class or other speaking arrangement.

Descriptive speech topics for students and Toastmaster International public speakers who struggle with finding descriptive writing topics. These places on earth are sometimes a slightly unknown and uncommon for holiday trips. Describe them with compelling facts while speechwriting:

I start this list of descriptive speech topics on places, countries and islands with the southeastern European Balkan country Bosnia and Herzegovina at the Adriatic Sea and bordering Croatia.

Of course, only if you can find interesting ideas for speechwriting based on the hints I gave on top of this page, it’s worth to develop and elaborate on these examples of descriptive speech topics.