This page has hundreds of topics to use in debates, and we are continually updating our list. If you’re stumped for ideas for your debate team, tournament, or essay, use this list as a starting point. With this topic guide, you can make a decision more quickly and get to work on crafting your argument. You may also check out our list of argumentative, controversial, and persuasive topics for more debate subject ideas. 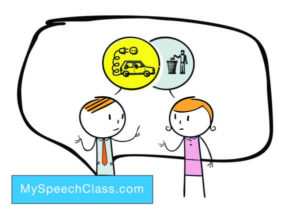 How to Choose the Right Debate Topic

With high levels of conflict and emotion involved in a debate, the pressure is on to choose a good idea for a topic. Choosing good debate topics can help participants learn to understand both sides of an issue while also encouraging an audience to make better-informed decisions on where they stand.

But there are important factors to consider, as personal opinions can quickly become personal attacks. Whether you’re looking for high school debate team practice, an argumentative essay topic, or good ideas for a debate tournament, here are a few tips to help you choose:

There are countless options available to present an informative and educational debate. Below are lists of debate topics you may want to use for debate team practice, tournaments, or speeches and essays. Remember to consider your interests, relevance, and your comfort in the topic to choose the best debatable subject.

Cite this article as: Jim Peterson, "Debate Speech Topics," in My Speech Class, May 13, 2018, https://www.myspeechclass.com/debate-speech-topics.html.