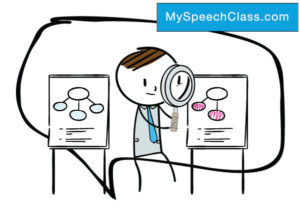 If at first glance the terms ‘compare’ and ‘contrast’ appear similar, be warned: They are not synonyms. When two things are contrasted, their differences are highlighted – such as “before” and “after” shots on a home makeover show. When two things are compared, they are put side by side so as to bring out their similarities. For example, we might set a green apple and a red apple side by side and note their similar shapes and location of their stems.

We compare and contrast things everyday without even realizing it. For example, when buying a car, shopping for a new mobile phone, or choosing a birthday gift for someone. As early as middle school, we are asked to formalize the ways in which we compare and contrast when we are assigned Compare and Contrast essays. This skill gets refined in high school and sees continued use through college and on into our professional lives.

If you are creating your own essay topic, then there needs to be an obvious basis for comparison and the comparison needs to make logical sense. For example, an iPhone and a Granny Smith would be a poor choice for comparison – even though they are both types of “Apples.” It would be better to compare two varieties of apples, or two types of phones.

If you are writing an essay, then think about how you will make a larger point about the two subjects being compared. Use your comparison to highlight something new about those subjects that the reader may not have considered before. Create a compare and contrast chart using a Venn Diagram or other graphic organizers such as grids or tables to help highlight similarities and differences.

It will take time to research and prepare, so try to pick a topic that interests you and yet still satisfies all of the academic requirements. Below, you will find plenty of compare and contrast ideas that can be used either as topics or as inspiration while you brainstorm your own ideas.

In our list you will see examples that compare or contrast:

Show listeners which one has the most absolute or relative benefits, pros and cons, and of course explain why.

Detailed topics with some notes and explanations:

A compare and contrast technique is an important tool and helps organize thoughts and ideas to gain meaningful insights. It allows you to point out both differences and similarities between two or more topics. These differences are based on certain criteria and a conclusion on which of the discussed items is superior. Below are some compare and contrast outline examples. The topics are provided along with a proposed thesis and essay (or speech) structure suggestions.

A compare and contrast essay is a fantastic way to lay out different product options. These are written in a logical way and based on specific standards. This helps readers make an informed decision on what to buy.

In an essay like this, the writer could introduce the topic by appealing to the animal lover in people. The writer could then highlight the dangers and potentially life-shortening effects of feeding a pet the wrong food. This should be done by using real-life studies and examples. The topic for a thesis like this could be something like the following. “This article will discuss the best dog foods for your furry friend based on price, nutritional value and breed size.”

Structurally, the article would then list five different types of dog food. Then, in the body of each product, compare and contrast their price, nutritional value and appropriateness by breed size. Also, the writer should be including other pertinent information. This can be done in the form of client reviews and variety of flavors available. Also included in this section could be anything else the writers deems to be relevant per product.

In the conclusion, it is important to recap all the important points. Then, to choose a favorite or recommend a buy. In some cases, it is sufficient to recommend buying different products based on different values. The writer can state that for an owner that places great value on food being organic and free of GMOs, option A is the best buy.  While for a price sensitive buyer option C is the best buy.

A Song of Ice and Fire; Who is Worthy of Sitting on the Iron Throne

While this example discusses a book/TV show, a compare and contrast article is a great way to organize thoughts. Using values and campaign promises for both a real life and fictional political race.

In this example, the writer can introduce the topic by vaguely introducing the story. It would be fair to assume the reader would be familiar with the series. The writer can then introduce the characters that are either in the running – or should be in the running – for power in Westeros. The topic for this thesis could be something like the following. “As Cersei Lannister boldly stated to Ned Stark in the first season,’When you play a game of throne, you win or you die'”.

Daenerys Targaryen, Sanza Stark and Cersei Lannister are all fierce female contenders to sit on the Iron Throne. However, only one will rule. This essay will evaluate each of these strong women. This comparison will be done through leadership skills, military prowess and political competence . This essay will determine which would be the most deserving ruler of the Seven Kingdoms.

The body of an essay like this one could be split into three paragraphs, one for each female contender: Daenerys, Sanza and Cercei. It would then point out each of the character’s strengths and weaknesses and analyze their behaviors and actions, based on the criteria of leadership, military experience and political competence.

Each paragraph could also discuss other factors, such as Daenerys’s freeing of slaves and the fact that she is the mother of dragons,Sanza’s miraculous survival of the hornets’ nest that is Kings Landing and Cercei’s cruelty, as well as her ability to manipulate people.

To conclude, the writer should clearly designate a winner of who should rule between the three characters. They could also further entice the reader by mentioning other contenders for power in the series. The model for this type of essay can also be used to analyze candidates for a real life political race or any competition.

Metro vs. No Frills

A compare and contrast article can also be used to point out the differences between two almost identical corporations and distinguish where people should be shopping at and why. In this example, the entity is grocery stores.

The topic could be introduced as food is a necessity to life and continue on to the fact that anyone living in an urban center will use a grocery store. The introduction could also include statistics on millennial poverty or facts about food insecurity. A thesis for an article like this could state that: “Although they provide an identical and essential service, Metro and No Frills vary wildly in price, food quality and variety.”

To conclude, the writer could do one of two things. Either label one chain the winner. Or could offer up pros and cons depending on the user’s specific needs. One chain may be more appropriate for a price-sensitive grocer. And while another may be better suited to someone with more complex dietary needs.

In conclusion, compare and contrast essays are a wonderful tool to help organize thoughts. Done by analyzing specific aspects of comparable products or people. They help writers identify both similarities and differences. While also providing a structured way to present this information to their readers.

Writing About Cause and Effect [+ Sample Topics]

1 thought on “Compare and Contrast Speech [Topics and Examples]”